MESSAGE FROM THE DESIGNERS 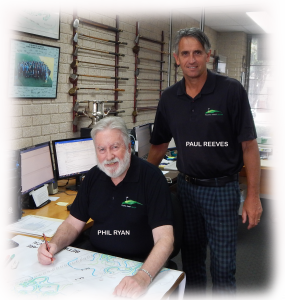 The Aquella Golf Course is laid out on the former site of the Thai Muang Golf Course (had been closed for 9 years) although only about 30% of the new golf course is located where the previous course was and none of the previous features where used.

“When Paul and I spent the initial few days looking over the property we found only a few obvious mounded old bunker sites and stumbled onto an old metal tee marker, which we gave to the project team,” said Ryan. “The old course was routed parallel to the beach, whereas our new layout touches the beach at one point and is mostly played just back of the proposed beach resort and villas. The good news was that the sand profile for the site was still intact, so we had an excellent base to work from and the entire new course was built from local sand which will give good drainage and superior turf surfaces”.

“We looked at some old photos of the Thai Muang course: they had a pot style and timber-faced bunkers. Having used timber in other PCD projects, both timber-faced bunkers and timber wall features, we decided to adopt the timber bunker faces as the signature for the new course, although our bunkering would be considered more of a resort style. We think it pays homage to some of the past while creating a unique future as timber-faced bunkers are not at all common in Thailand.”

The Aquella property has 2.6 kilometres of pristine sand beach framed by coconut palms and views of the Andaman Sea.

Being directly on the coast of the Andaman Sea is a real blessing visually, although in some parts of the year the wind is strong. In designing the Golf course we knew we needed to at least have one hole directly on the beach and the Owners supported this, so Hole 11 a feature Par 3 was created early on.

Prior to the design being done we visited the site several times and spent days walking through the jungle that had grown back over the site since it had been closed, a key feature of these walks was identifying significant trees which we have managed to retain. This retention of larger trees has given the Aquella layout an older look belying its new construction.

Pacific Coast Design worked with numerous stakeholders on the project, including Pacific Century Premium Developments, which bought the site in 2016, the Lan Kwai Fong Group and its associated entity Paradise Designs Group of Phuket, and Absolute Golf Services, which is managing the club. Good golf design recognizes the market which the project was trying to attract, and all stakeholders wanted a strategic golf course that stood out within the Asian market as both a great layout and fun to play for all levels of golfer. Aquella as a Resort really wants people staying and visiting to enjoy themselves and the golf needed to reflect this.

The site had several ‘klongs’ (creeks) winding their way through and so our design needed to use these as features of the golf as well as giving golfers options for either laying up before or taking them on and (if successful) potentially improving the score. While the water does come into play on most golf holes we do not think it will dominate golfer thinking nor will it impact on reasonable golf, there is plenty of alternative paths / strategies for golfers to follow.

We like to think of the golf as a journey, and so we need to balance the holes giving golfers differing experiences as they move through the site. This involves different shots, different angles, bunker placement, visual experiences, undulating mounding along fairways so stance is changed and different directional play. The journey needs to be fair and while the green surfaces are large, fast and undulating they putt true and so reward a good line and length.

The two nine-hole loops are well balanced with only 25 yards difference and the overall 18 Holes is a Par 72 of 7,008 yards which from the back markers is a real test of golf. The multiple tees (minimum of three for each hole) give golfers differing lengths and in many cases differing angles so as to make playing the golf course more than once a similar but unique experience.

Each of the holes is designed to challenge the low marker to think and position to achieve a good score whist giving the high handicapper more room for error.

Aquella was a joy to work on, we hope that you will enjoy playing it as much as we enjoyed creating a golf course that achieved and exceeded our aims.

We use cookies on our website to give you the most relevant experience by remembering your preferences and repeat visits. By clicking “Accept All”, you consent to the use of ALL the cookies. However, you may visit "Cookie Settings" to provide a controlled consent. Terms & Conditions
Cookie SettingsAccept All
Manage consent

This website uses cookies to improve your experience while you navigate through the website. Out of these, the cookies that are categorized as necessary are stored on your browser as they are essential for the working of basic functionalities of the website. We also use third-party cookies that help us analyze and understand how you use this website. These cookies will be stored in your browser only with your consent. You also have the option to opt-out of these cookies. But opting out of some of these cookies may affect your browsing experience.
Necessary Always Enabled
Necessary cookies are absolutely essential for the website to function properly. These cookies ensure basic functionalities and security features of the website, anonymously.
Functional
Functional cookies help to perform certain functionalities like sharing the content of the website on social media platforms, collect feedbacks, and other third-party features.
Performance
Performance cookies are used to understand and analyze the key performance indexes of the website which helps in delivering a better user experience for the visitors.
Analytics
Analytical cookies are used to understand how visitors interact with the website. These cookies help provide information on metrics the number of visitors, bounce rate, traffic source, etc.
Advertisement
Advertisement cookies are used to provide visitors with relevant ads and marketing campaigns. These cookies track visitors across websites and collect information to provide customized ads.
Others
Other uncategorized cookies are those that are being analyzed and have not been classified into a category as yet.
SAVE & ACCEPT